Images above and below: video stills, prequel, Episode 01

Earth was left as we consumed it and explored new places from then on - with the promise of preserving this world as a museum to learn about flora, fauna and their evolution. Pumps powered by solar energy ensured the balance between land and groundwater.

Artificial creatures provided minimum maintenance while archiving their environment. All this for the overall plan of constructing a surveillance tool to observe that evolution from afar: For those who would miss the Earth and for those who might be interested in learning from its progress.

However, we looked ahead and moved towards the future. What remains is the view through the eyes of a being who documents and archives the promise of eternity. In several episodes, Pawāaraibu - filling the vacuum tells the story of an artificial intelligence that travels in the body of a small drone as one of the last living beings on the post-human earth.

The earth is shown as a conglomerate of nature, remnants of human intervention and up to now modern technology that takes care of maintenance. We find ourselves in the essence of the drone, whereas the seemingly human body has become distant in its abstraction.

Episode 02 - wandering the archive, which is hosted on the social VR platform Mozilla Hubs, travels into an environment without time-space attribution.

We find ourselves in the head of the drone, traveling through the archive of its processed data, which consists of fragments of the previous world.

These remaining excerpts stand as a proxy for that forgotten history that has been lost in brutal landscape inscriptions caused by exploitation of earthly resources.

Within 4 scenes reminiscent of a musical, we wander through 3D models and listen to the song of the drone, texts that also repeatedly appear in the virtual world itself and describe its surroundings and happenings. 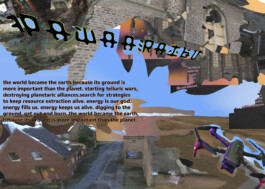 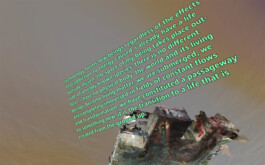